Yesterday a split 11th circuit panel decided on Burns v.Town of Palm Beach. This case was a constant issue at the interface between property law and constitutional law: is the architectural design protected by the first amendment to the constitution?

Donald Burns wants to tear down his “traditional” beach villa and build a new one, almost twice as large, in a mid-century modern style. The new mansion, Burns says, will reflect his evolved philosophy of simplicity of lifestyle and living with an emphasis on less personal possessions. The new two-story mansion will have underground parking, an outdoor pool and spa, cabana and gym.

In order to build his new mansion, Burns had to get approval from the Palm Beach City Architectural Review Board. . . .

Using their criteria, the Architectural Examination Board refused Burns’ building permit. The commission found that his new mansion was not in line with planned property developments in the area and that it differed excessively in architecture, layout, dimensions and size from other houses within 60 meters.

Burns sued the city, claiming that the criteria the commission used to deny his building permit violated his freedom of expression under the First Amendment and his rights to due process and equal protection under the Fourteenth Amendment.

Here is a photo of Burns’ current 10,063-square-foot mansion.

But in 2013 Burns decided to demolish the “traditional house” so he could build a new mid-century modern mansion to convey the evolution of his personal philosophy. He wanted his new villa to be “a means of communication and expression of the person inside: me”. He chose a design from international architecture or mid-century modern architecture because it emphasized simple lines, minimal decorative elements and open spaces made from solid, high-quality materials. According to Burns, mid-century modern design conveyed that the new home was clean, fresh, independent, and modern – a reflection of his evolved philosophy of simplicity in lifestyle and living with an emphasis on less personal possessions. It also communicated Burns’ message that he was unique and different from his neighbors.

And here is the revised plan: 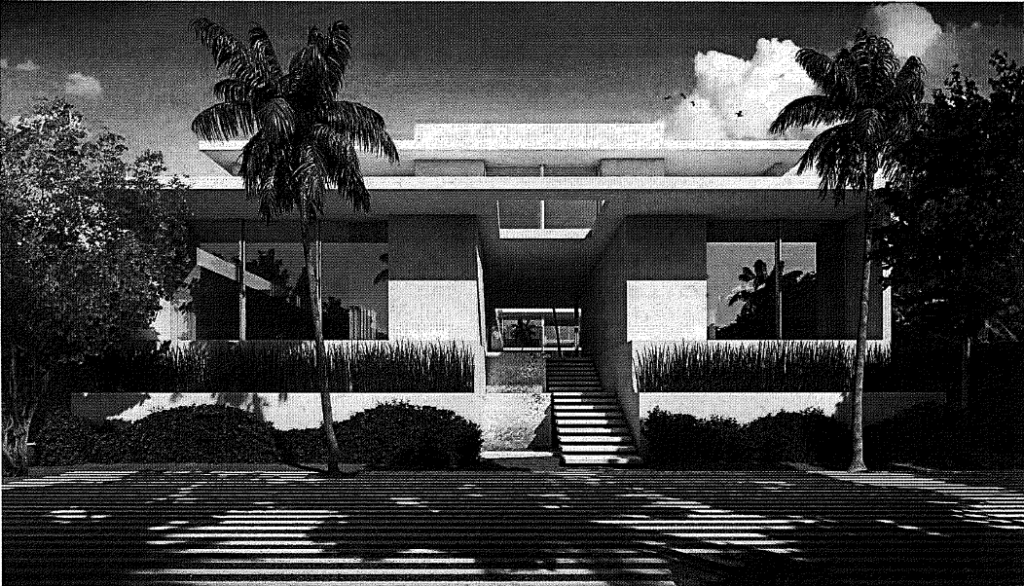 Burns first presented a plan to the city council that proposed demolishing his existing 10,063-square-foot mansion and building a 25,198-square-foot mansion in its mid-century modern design. His emphasis on less personal possessions included two floors and a basement with a five-car garage, wine storage area, and steam room. The first floor would have an open air entrance, guest bedroom, dining room, kitchen, family room, powder room, and living room. The open air entry would lead to the pool, spa, and cabana. The second floor would have more guest rooms, a gym, and the master bedroom.

The majority noted that Burns’ design was not protected by the First Amendment, nor were the city’s criteria unconstitutionally vague:

We conclude that the summary judgment was not delivered prematurely, and we confirm the claim made by the First Amendment, as there was little likelihood that some kind of message would be understood by those who viewed Burns’ new beach mansion. We also confirm the summary judgment on the demands of the Fourteenth Amendment because the commission’s criteria were not unconstitutionally vague and Burns has not provided evidence that the commission applied its criteria differently to him than to other similarly located villa builders

In my view, the First Amendment – the strongest thought, speech and expression in the history of the world – does not allow the government to impose its majority aesthetic whims on Burns without good reason. The First Amendment protection of freedom of expression is not limited to the polite exchange of words or brochures. It is not limited – as the majority suggests – to public presentations that clearly relate to the tight topics of the day. It protects both art and architecture, and it protects artistic expression in your own home as much, if not more, than in public spaces.

The majority and the dissent even argued about the nature of the architecture review committee:

The dissenting opinion uses the name “ARCOM” for the architecture examination board and then calls the name “Orwellian”. Deviating Op. at 72. If Orwellian disagrees with a government agency that makes regulations that affect our lives, then the architectural review board is as Orwellian as the state board for therapeutic massage, the local dog catcher, and every one of the departments and agencies alphabet soup and offices in Washington, DC

Yes, Orwellian. All of the above.

This case should be included in the property law case books.

The Rising Call For “Random Selection” For College Admissions – Thelegaltorts