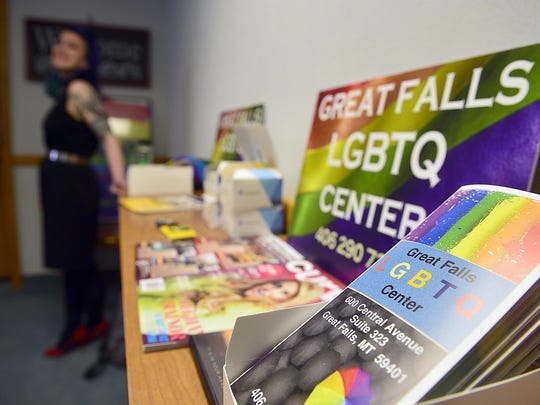 The LGBTQ Center in Great Falls is run by a volunteer not-for-profit that provides community events and services to the LGBTQ community. It is one of three similar organizations with a brick-and-mortar presence in Montana. (Photo: TRIBUNE PHOTO/RION SANDERS)

Members of the Great Falls City Commission decried discrimination against LGBTQ residents at a meeting Tuesday but concluded a nondiscrimination (NDO) ordinance isn’t the best way to address the problem after hearing from the city attorney and hundreds of residents.

On June 15, the U.S. Supreme Court, in Bostock V. Clayton County, ruled that the Civil Rights Act of 1964 protects gay and transgender workers from workplace discrimination.

City attorney Sara Sexe concluded that a local NDO affording protections to LGBTQ residents was not necessary, particularly in light of that case. Although Bostock dealt with employment discrimination, the language clearly applies to housing and public accommodations as well, Sexe said.

Commissioners cited the Bostock case and Sexe’s legal analysis in deciding not to pursue an NDO.

The NDO ordinance was proposed in July by the Great Falls LGBTQ Center in the areas of employment, housing and public accommodations. The group previously said Sexe’s legal analysis was wrong.

Sexe countered that criticism Tuesday when the Commission conducted a special work session solely devoted to an NDO ordinance.

The Bostock decision clearly clarified that sexual orientation and gender identity are sex-based classifications now afforded protection, with the decision coming on top of existing state and federal anti-discrimination laws, she said.

Sexe said she discussed her conclusions with other city attorneys and attorneys in the human rights field.

“All agreed with this fundamental conclusion,” said Sexe, who recommended that commissioners consider adopting a proclamation or resolution instead.

However, it is her legal opinion that adopting an ordinance that would provide limited damages wouldn’t provide any great relief for LGBTQ residents who experience discrimination.

The mayor said he hopes LGBTQ residents do not misinterpret the Commission’s decision not to pursue an NDO.

Commissioners believe the testimony of LGBTQ residents about the discrimination they say they have faced in the city, he said.

But if the city passed an NDO, it would create another recourse that would, in fact, be less attractive than state and federal legal avenues already in place, especially in light of the Bostock decision, Kelly said.

Kelly recommended that the Commission pursue a resolution instead that would state the city’s commitment to the inclusion of all protected classes of people.

With the Bostock decision in place, the city now has an opportunity to broadcast to the state that the city welcomes LGBTQ residents, Kelly added.

“And we have the full capacity to use federal law to make sure that happens, and we will,” Kelly said.

Commissioner Mary Sheehy Moe said that she found Sexe’s analysis that the Bostock ruling applies not only to employment but housing and public accommodations “incontrovertible” and that passing and NDO could actually do more harm than good.

“We have what we want in Bostock,” Sheehy Moe said. “I don’t want to be the City Commission that says it doesn’t cover those things.”

Sheehy Moe added, however, that some of the comments the city received opposing the NDO were upsetting even though they may have sounded civil because “you can say ugly things in civil ways.”

“I find it wounding,” Sheehy Moe said of those comments. “It wounds me as an American because I pledge allegiance to a nation that promises liberty and justice for all, not someday for all.”

Sheehy Moe said she also supported a resolution stating the city’s support of all protected classes because “there is a need for action.”

Sexe plans to work on the resolution before presenting it to commissioners for input.

Kelly said the city received 250 written comments for and against the NDO.

The decision to drop the ordinance and pursue a resolution of support instead came at the close of a 3 1/2-hour work session, most of which was taken up by sometimes passionate comments from 32 residents who spoke against the NDO and 12 in favor.

Those in support said the NDO was still necessary despite the Bostock decision and state and federal laws in order to provide a local avenue to address discrimination and signal the city as a more welcoming place live and do business.

“I feel distressed we have a large group of people debating whether or not I get equal treatment,” said Dr. Kelly Quick, an assistant professor at the University of Providence, testifying in favor of an NDO. “Because I know there are others who don’t want me to have equal treatment. They want the right to say me, ‘You can’t be here.’ I find this immensely offensive and damaging to me.”

Jasmine Taylor, president of the LGBTQ Center, said a local NDO would be preventative and also say as a community that it won’t stand for discrimination. 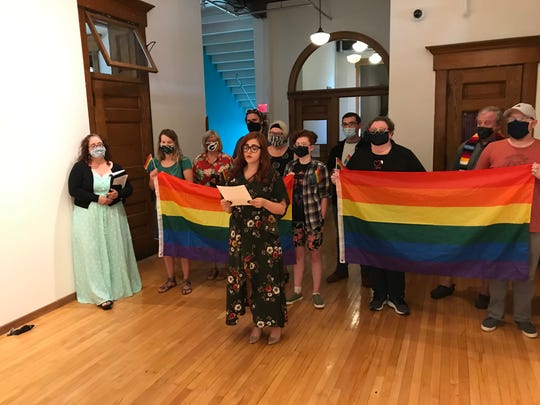 Jasmine Taylor of the Great Falls LGBTQ Center reads a statement Monday outlining the center’s legal position that a nondiscrimination ordinance is necessary in Great Falls. The city attorney says an NDO is not necessary. (Photo: Karl Puckett)

The center agrees that the employment part of the NDO should be dropped in light of the U.S. Supreme Court decision but argued that there still are no “black-letter protections” in the areas of public accommodations and housing,” Taylor said.

“Right now we have landlords who outright will not rent to LGBTQ people here,” Taylor said.

Sexe said there are protections in place for housing and public accommodations.

“I would not simply dismiss the needs of the community that has clearly defined protections as held by the United States Supreme Court,” Sexe said.

And nobody has to wait for the Bostock decision to be accepted in Montana, said Sexe, refuting another claim by supporters of an NDO ordinance. “It’s been decided by the highest court in our land and it’s binding,” Sexe said.

“I just feel it’s not something that is a problem in our community,” said Tony Rausch, a resident who spoke against the NDO. “I think as Montanans we have all had respect for each other.”

The Rev. Gary Hart of Victory Church in Great Falls, who serves on the executive board of the Great Falls Pastors Prayer Network, made up of 30 evangelical churches and four faith-based organizations, said passing an NDO could potentially open up faith-based groups to discrimination and legal battles.

The group supports renting without prejudice and hiring the right person for the job, Hart said. That said, Hart asked commissioners to respect the religious rights of those in the faith-based community who may not accommodate certain individuals because it may violate their beliefs.

An NDO ordinance sounds noble because everybody deserves dignity and respect, said resident Fred Miller, an opponent. But an NDO would have unintended results in that it would assault religious liberty and the freedom to be a conscientious objector such as those who refused to serve in the Vietnam War.

“If that was a valid excuse, then it’s a freedom we need to protect,” Miller said.

Others who opposed the NDO brought up concerns about men who have transitioned to women using women’s restrooms and bathrooms and photographers and cake makers being penalized for refusing to serve the gay community.

Commissioners and Taylor, of the LGBTQ Center, said the NDO would not have changed anything related to bathrooms or locker rooms.

“Tonight’s a tough one,” Commissioner Tracy Houck said. “It’s been a tough one because I truly do believe in freedom. I often vote my personal beliefs with my dollar. I don’t go to certain establishments because I choose not to spend my money there.”

But if discrimination doesn’t exist, she added, why would another layer of protection bother anybody? she asked. Tounge in cheek, she also said she was thankful so many straight people had not witnessed discrimination based on sexual orientation or gender identity in the city.

Hauck said she was told by one resident that she wouldn’t win another term if she supported the NDO.

Houck said she was disappointed in how many pieces of correspondence the city received opposing the NDO that seemed to be time-stamped at the exact same time and raised the same concerns, comparing them to robocalls.

“Somebody out there with power and influence was making sure people responded even though they didn’t understand what they were responding to,” said Houck, noting that many residents appeared to incorrectly think the Commission was voting on an NDO Tuesday.

Commissioner Rick Tryon said the city also received many comments supporting the NDO that appeared to have been copied and pasted from the Great Falls LGBTQ web site. He said he considered those opinions legitimate.

“I think we have to respect that from both sides, rather than discounting them as robocalls,” Tryon said.

Tryon said he had no doubt there “are dark corners of discrimination in this community.”

But the only relevant question is whether protections already exist at the state and federal level, and whether members of the LGBTQ community have the same legal remedies for recourse in cases of discrimination as any other group. He said he worried if the city passed an LGBTQ NDO it would go down the road of passing ordinances for other groups as well.

“I think our job is to fix potholes and spend money wisely,” not pass ordinances on issues bast handled at the state and federal level, Tryon said.

Other cities have passed NDOs

The cities of Helena, Bozeman, Butte, Missoula and Whitefish have passed NDOs.

Great Falls would have been the first community to pass an NDO after the Bostock Supreme Court ruling.

“And I really think that new decision is where it belongs,” Robinson said of dealing with discrimination. “I don’t think we want it on the local level. So I have to say to the gay community I love so much it is not kicking it down the road as one person suggested. What I think we should do is probably let it die.”

Robinson then recommended that the Commission consider a resolution showing support for all different kinds of people including LGBTQ residents, Native Americans and the elderly. He thanked Taylor of the LGBTQ Center for bringing the issue forward “and having us think about it.”

Karl Puckett covers the city of Great Falls and Cascade County for the Tribune. He can be reached at [email protected] or 406-750-5383, or on Twitter at @GFTrib_KPuckett.

This coverage is only possible with support from our readers. Sign up today for a digital subscription.