It is quickly becoming a topic of conversation among some activists on the left that Mitch McConnell violated all norms to obstruct Barack Obama's candidates for the Circuit Court, and so it is only fair that the Democrat grab the court as soon as possible. (Let's ditch for another day the other trending claim, fed by Joe Biden himself, that filling ordinary legal positions is itself a form of "packing" dishes indistinguishable from expanding the size of the court.)

President Donald Trump has not helped by repeatedly boasting that Obama left "a big, beautiful gift" from vacancies in the judiciary. Critics of Trump-appointed judicial officers have been quick to respond that the only reason these posts are vacant is because of the unprecedented obstruction of Obama's candidates by Senate Majority Leader Mitch McConnell.

In truth, Trump inherited a number of vacant circuit court seats that were only slightly larger than those inherited from Obama (Trump inherited significantly more vacant seats in district courts). If Obama left him a "big, beautiful gift", Bush left the same gift for Obama. Bill Clinton inherited a comparable number of vacancies when it was first inaugurated, though George W. Bush was a little more fortunate. Trump inherited far more open seats than Ronald Reagan, but otherwise found himself in the same position as the youngest presidents. Neither Trump nor Obama were unique. They reflected what the policy of judicial appointment has been like over the past three decades.

There are endless clues in the war for the appointment of judicial officers that stand in the way of any effort to potentially de-escalate a potentially very unhealthy situation. There's a lot of bad blood and hurt feelings on both sides, and there's little to be gained in trying to determine who hurt who first.

But we should at least make it clear that Obama has not been clearly ill-treated in relation to his Circuit Court appointments (Merrick Garland's question is a separate matter, but Garland appears to be becoming a mere symbol of the general obstruction of candidates to justice). The Senate obstructionism issue was not a two-year anomaly in 2014-2016 (though those two years were an extreme version). It was a lot deeper and more persistent than that.

There is no question that Donald Trump benefited from the combination of a relatively large number of open seats in the lower courts, procedural reforms that allowed the Senate to approve judges by simple majority (starting with nuclear weapons leader Harry Reid) of filibusters in the year 2013) and control of the Senate by the same parties (the Democrats immediately lost control of the Senate in 2014 and therefore had little opportunity to use the new rules). As a result, Trump was able to appoint a relatively large number of district court judges in a single term. He would not have been able to do this if all three things had not been true.

Details on nominations and approvals from district courts over the past forty years can be found below.

As I have fully explained in a paper found here, the obstacle Obama encountered in his nominations for the lower court had become self-evident over several presidencies of both political parties. Trump found many vacancies in the district courts because the Senate had not allowed the president to fill vacancies – and not just in the last two years of Obama's presidency under a GOP Senate. The Senate had done this for nearly a quarter of a century.

As the illustration above shows, since the Reagan administration began in 1981, there have been significant differences in the percentage of county court nominations that resulted in affirmation. Presidents are likely to have more trouble getting their candidates approved when the other party controls the Senate, and they are especially prone to struggling when a presidential election is approaching. (In particular, district court nominations are rarely defeated in a vote; unsuccessful nominations are either returned or withdrawn.)

But it has been different since the Clinton era. The presidents of both parties have found that their nominations have been hindered by the senators from the other party. It took a lot longer for a candidate to be confirmed. The bank never received more nominees. The behavior of the President is just as important as the behavior of the Senate. Some presidents flood the Senate with candidates, others don't (Obama had few successful appointments in his final years in office, but he also made very few nominations. Even if Obama had a Democratically controlled Senate, he moved up relatively few candidates when the Democratic Senate began Obama's second term with as many vacancies as he did when he arrived at the White House – some presidents keep returning candidates to the Senate, while others pull the plug when the candidates are stuck.

We get a slightly different picture of the latest developments if we do not focus on individual nominations but on individual nominations. Unsuccessful candidates for the Circuit Courts will not receive a floor vote; They just dangle in the wind. Given the delay in confirmation, some nominees who ultimately succeed will go through multiple nominations. If we trace the fate of certain individuals to their ultimate destiny, we see increasing Senate obstruction that culminated in the George W. Bush administration. Over a third of the people suggested by Bush for a seat on the circuit were not confirmed by the end of his presidency. No other president has such a grim record. Obama's overall record was comparatively good. 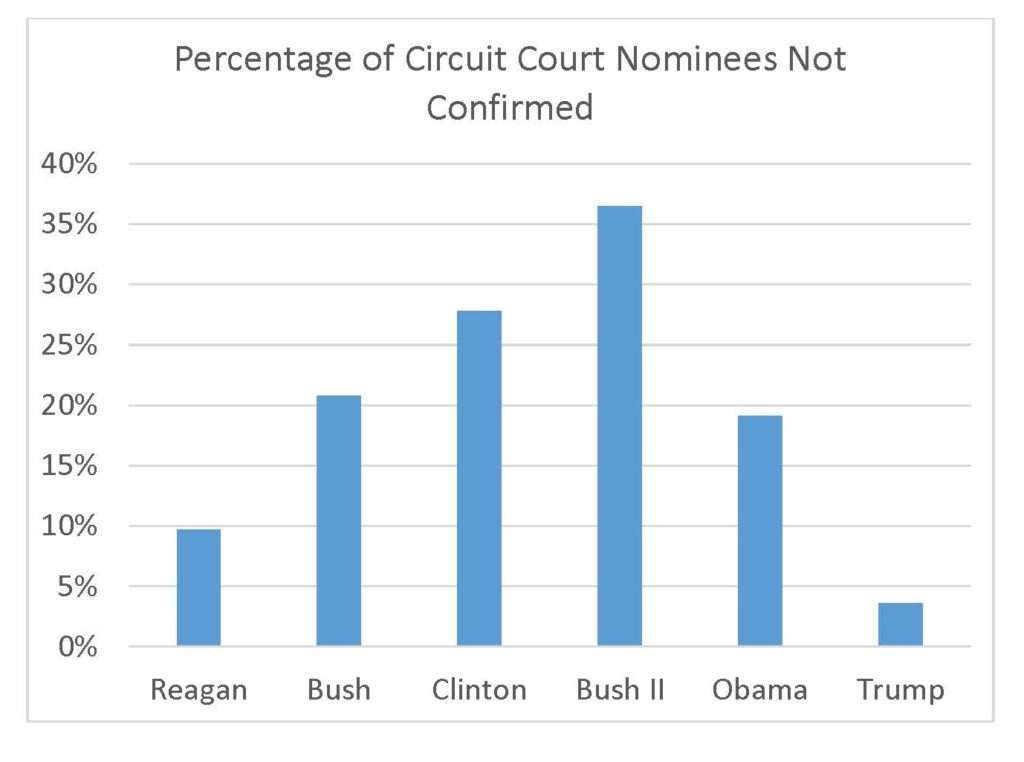 If we focus on individual candidates (rather than nominations, as I did in the paper here), the divided government seems to be a major culprit. George W. Bush had extraordinary problems getting candidates with a Republican majority in the Senate when minority obstruction was at its peak. He was even worse off with a Democrat-controlled Senate that was even less willing to confirm its candidates that the Republican-controlled Senate was with Bill Clinton. Obama had a Democratic Senate for most of his presidency, and his success rate has been quite high (if not quite in line with historical expectations). However, when Obama lost the Senate in the last two years of his presidency, his success in nominating seat district courts stalled. Opposition senates were also difficult to please by the end of the Clinton and Bush presidencies, but Obama's success rate was low, even by those standards. 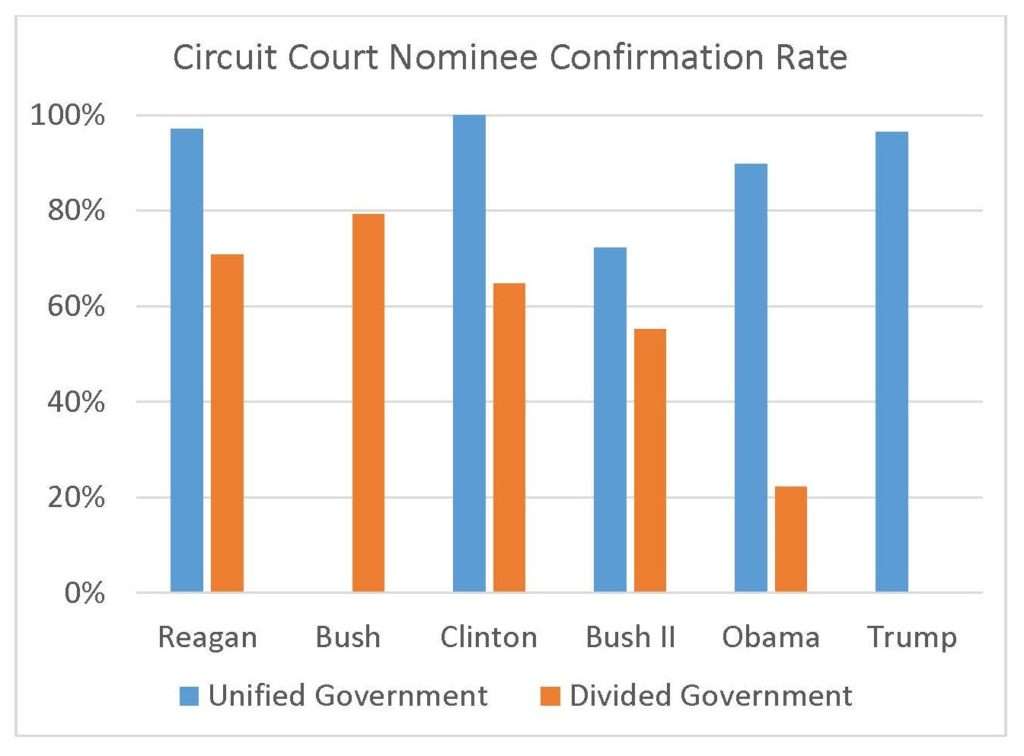 Ultimately, the youngest presidents were able to appoint a significant number of district court judges. Donald Trump likes to brag about installing an unprecedented number of federal judges, and he's done quite well for a tenure as president. However, he has appointed fewer district court judges, who in turn make up a smaller percentage of the Bundesbank than one-year-old President Jimmy Carter, who benefited not only from an accommodating Senate but also from an expanded judiciary. If he is defeated in November, he will have left a mark on the racetracks comparable to Obama's and only slightly below that of Clinton and Bush. 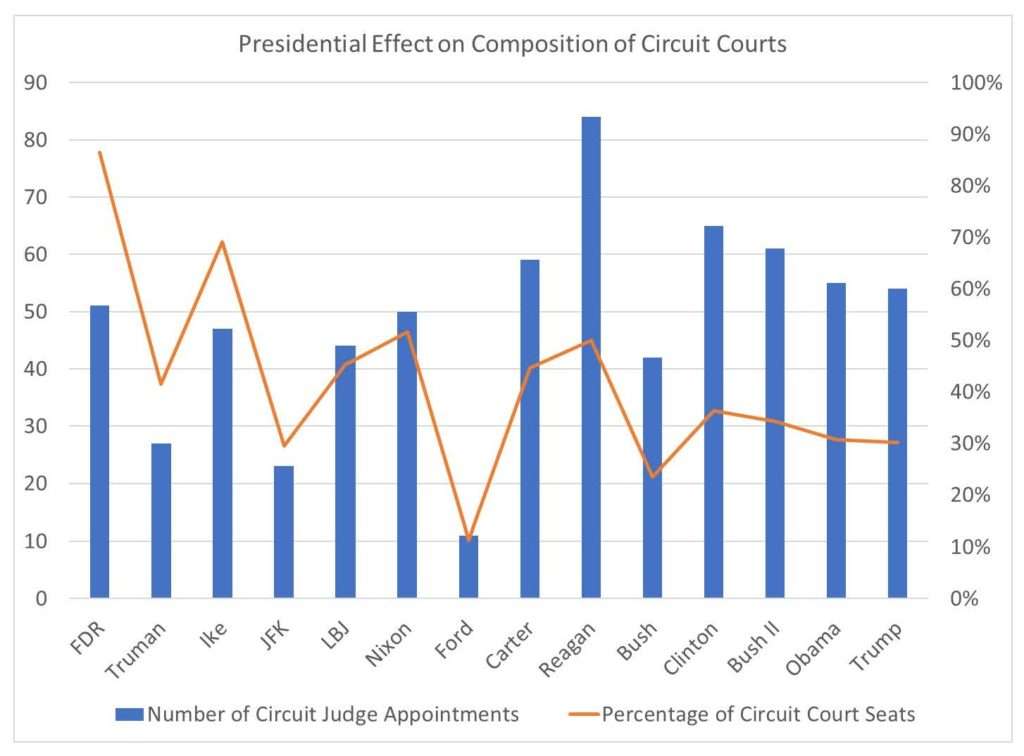 Senate obstructionism has been a widespread problem for decades. The Senate hit new lows in the last two years of the Obama presidency, but it was a continuation of a trend, not a sudden exit. If Senate Republicans had been willing and able to do the same earlier in the Obama presidency or at the beginning of a Hillary Clinton presidency, it would have been a truly extraordinary change in inter-branch relations (even by modern standards), but these circumstances never occurred. What seems obvious is that Trump has achieved the same confirmatory success that most presidents with Senates from the same party enjoy. Unfortunately, if he had faced an opposition Senate, there is little reason to believe that recent trends would have reversed.

We may have resolved the confirmation malfunction for unified government, but the malfunction that recently occurred during divided government seems likely to still be with us.

Refilling the Swamp? Trump Rescinded The Moral Lobbying Bar For Aides As He Was Leaving Workplace – Thelegaltorts

Biden’s Revival of Trump’s Eviction Moratorium is at Odds with His Place on the Legality of a Nationwide Masks Mandate – Purpose.com