Tianna Arata, in the center, stomping on a burnt flag

Attorney Lee Merritt joins protesters who have demanded the district attorney drop charges against Arata. Merritt asserts Arata’s arrest is an example of issues with the justice system in the United States.

“Tianna Arata was arrested for being a protest leader in San Luis Obispo— the most recent example of America’s justice system demonstrating its ability to arrest everyone but the men who murdered Breonna Taylor in her bed,” Merritt posted on Instagram on March 11. “Dan Dow, district attorney, you have a very small window of time to drop these charges before your county, city and home are bombarded by activist from all over the country. Find out if this is an idle threat if you want to.”

For three weeks, protesters have marched almost daily in downtown San Luis Obispo demanding Arata be set free, that charges are dropped, and that businesses that do not show support for their movement are shut down. In addition, Arata’s supporters have bombarded local goverment agencies with emails, calls, and public meeting comments demanding Arata be set free from prison and that the charges are dropped.

However, Arata was booked into jail and released without bail the same evening. In addition, charges have not been filed against her. Merritt has not returned requests for comment.

It appears Merritt and the protesters are unaware that Arata is not in jail and that charges have not been filed. The district attorney’s office is reviewing the evidence before making a determination on charging Arata.

“We are required to investigate, review the recommendations,” said Deputy District Attorney Eric Dobroth. “It is our duty and obligation to engage in the process.”

On July 21, after congregating at Mitchell Park, Arata led approximately 300 protesters onto Highway 101 from both Osos Street and California Boulevard, blocking all lanes in both directions for nearly an hour. While on the highway, protesters ran after vehicles attempting to drive off the freeway and blocked vehicles.

In one incident, a protester threw a skateboard at the back window of a car. The window shattered, with pieces landing on a 4-year-old boy, who was unharmed. In another altercation, protesters refused to let a pregnant woman’s parents drive her to the hospital.

Officers arrested Arata following the protest, and released her shortly afterwards without bail. 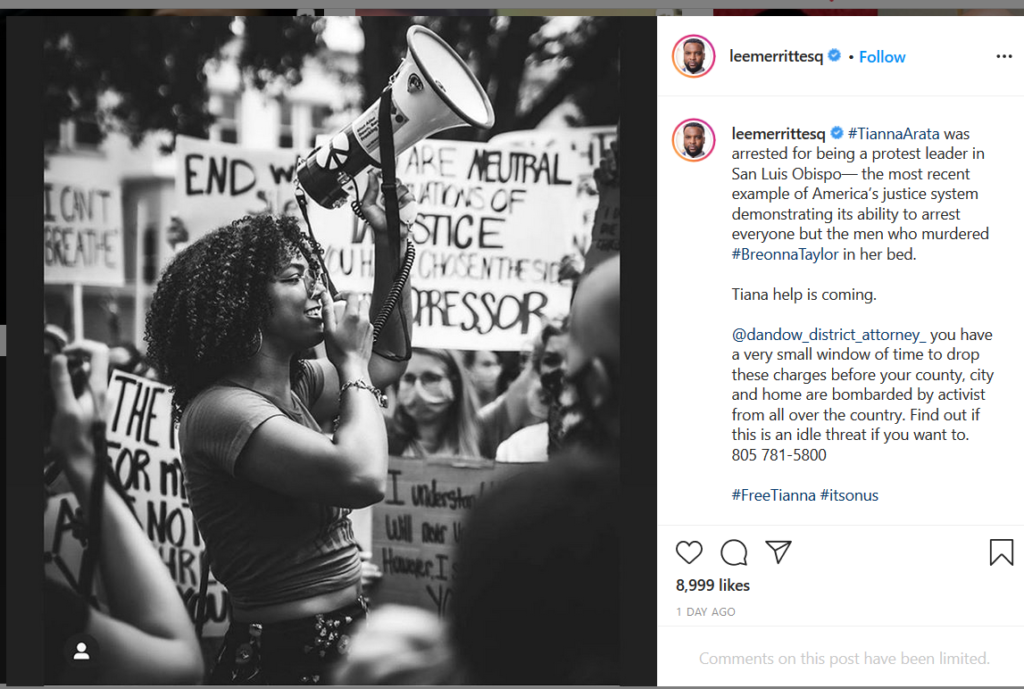 “Recent social media posts and other media reports state that Ms. Arata faces 15 years in prison for her conduct. This is patently incorrect and a reckless statement.” according to the SLO District Attorney’s Office. “All individuals charged with a crime are legally presumed innocent until convicted in a court of law. Therefore, it is premature to speculate or discuss what possible sentence would be appropriate or warranted.”

Arata’s arraignment is scheduled for Sept. 3. The district attorney’s office anticipates prosecutors will make a decision on whether to file charges by that time.