Companies large and small have asked for safe harbors from Covid-19 lawsuits, setting the stage for a political battle once Congress resumes.

Outside a Target in East Hanover, New Jersey, a sign admonishes shoppers of the state law requiring face coverings to protect against the novel coronavirus. (Courthouse News photo/Nick Rummell)

WASHINGTON (CN) — In a country still very much in the muck of a global pandemic, the tide of business reopenings is likely to carry with it a new problem of coronavirus-related lawsuits.

This impending wave of torts spurred a signal flare from the National Association of Manufacturers and several other trade groups, which asked House and Senate leaders Friday to enact “limited and rational safe harbors” that would curtail any “misguided litigation.”

Businesses that have kept their doors open in these times “of remarkable legal uncertainty … risk becoming the targets of coronavirus-related lawsuits that will ultimately do nothing to reduce the spread of this disease or address the suffering that Americans have endured because of it,” according to a draft of the letter shared with Courthouse News.

“Companies doing their best to control the spread of this disease with the limited guidance available deserve legal protection,” it continues.

While disclaiming that they seek any safe harbors for “bad actors that operate in reckless or intentional disregard,” the groups also calls for a temporary suspension of suits “that threaten to shut down vital industries — including even health care providers.”

The association’s general counsel did not immediately respond to an email seeking comment on the letter.

Both the U.S. Chamber of Commerce and the American Tort Reform Association have published recent white papers that closely track the letter’s requests, warning that the failure to change evidentiary rules or workers’ compensation laws could usher in an onslaught of Covid-19-related lawsuits. 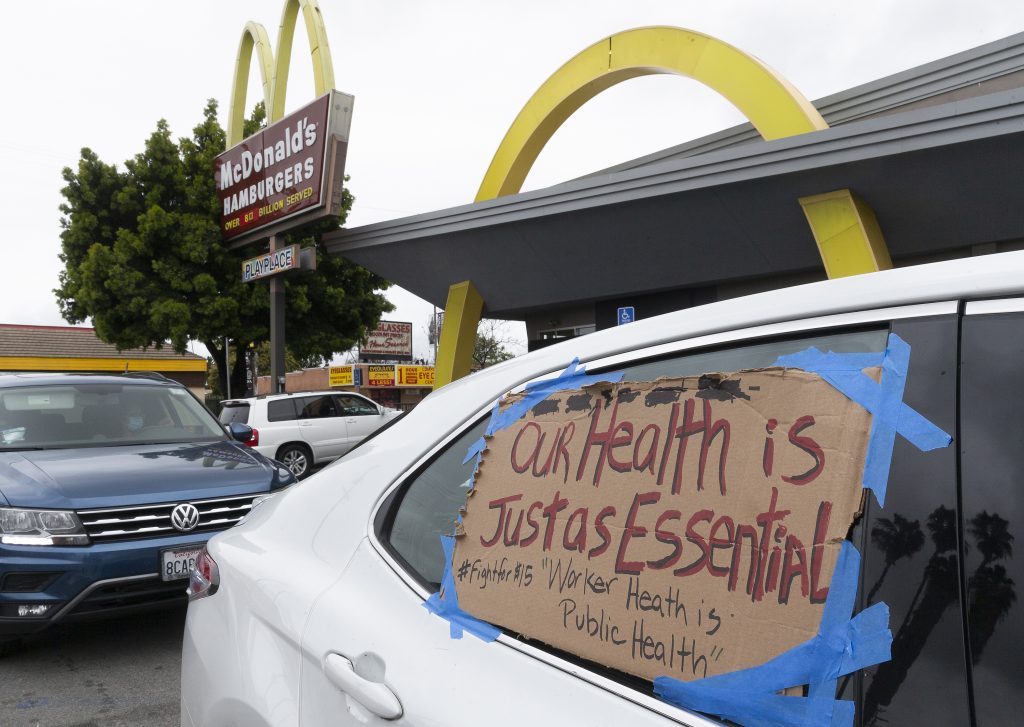 Protesters stop momentarily at a McDonald’s drive-thru, as they join fast-food workers protesting for a second day outside the restaurant in the Crenshaw district of Los Angeles on April 6. (AP Photo/Damian Dovarganes, File)

Consumer advocacy groups, unions and plaintiff-side lawyers are not waiting to contest these curbs on liability as the Covid-19 crisis builds.

Already certain industries have been targeted for Covid-19 liability, including cruise lines that kept infected people on board and nursing homes where dozens of residents died from the virus. But even smaller companies now fear the T-word over Covid-19.

“There is no lack of creativity when it comes to new kinds of torts,” Karen Harned, executive director of the legal center at the National Federation of Independent Businesses, said in an interview. “Covid is one that is tailormade, sadly, for abusive lawsuits.”

The Trump administration already is debating whether it will act to curb liability. Last month White House economic adviser Larry Kudlow told reporters that a liability shield from Covid-19 lawsuits “can be done through executive order or regulatory changes, and some of it might require legislation.”

A patient is wheeled out of Cobble Hill Health Center by emergency medical workers on April 17 in Brooklyn, New York. (AP Photo/John Minchillo)

Legislation may soon come down the pike. In a statement earlier this week, Senate Majority Leader Mitch McConnell hinted he would help lead the fight for liability blankets and class-action safe harbors for all manner of companies that face what he says are “years of endless lawsuits” over Covid-19 exposure.

“We cannot let that happen,” the Kentucky Republican said. “Our nation is facing the worst pandemic in over a century and potentially the worst economic shock since the Great Depression. Our response must not be slowed, weakened, or exploited to set up the biggest trial lawyer bonanza in history.”

Republicans spoiling for a fight will likely find one from Speaker Nancy Pelosi, who countered on Wednesday that protections for workers, consumers and patients must be at the forefront of new legislation. “So we would not be inclined to be supporting any immunity from liability,” Pelosi told reporters.

Unions and consumer advocacy groups also plan to fight any such proposals to liability.

After President Trump ordered meatpacking plants to reopen, the United Food Commercial Workers and other groups demanded the government ensure worker safety at the plants, where more than 3,000 workers already have taken ill with Covid-19.

“It’s unfathomable that the administration is still not requiring meatpacking plants to implement the latest CDC recommendations,” which include keeping workers six feet apart and providing protective gear, said Debbie Berkowitz, program director at the National Employment Law Project, in a statement.

“Without these necessary and common-sense protective measures, Covid-19 will continue to spread in these plants and the communities around them.” 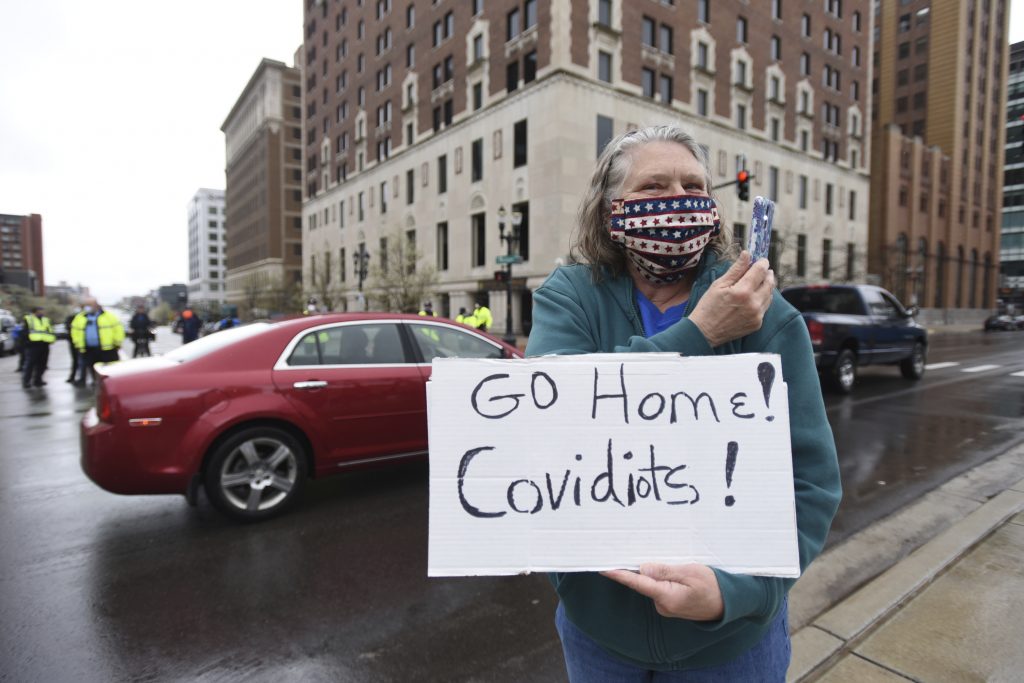 On Friday, workers at Amazon, Walmart, Target, Whole Foods, and Instacart mobilized to strike against what they say are unsafe working conditions.

“The corporations and the government are willing to sacrifice tens of thousands of us,” strike organizer Kali Akuno said. “We have to put people before profits.”

Mary Kay Henry, president of the Service Employees International Union, balked at what she called the outrageous attempt by companies to “shirk their legal responsibility.”

“Infections are still spreading, especially in communities of color, where people are more likely to work dangerous jobs that cannot be done from home, be denied proper protective equipment, and face barriers to adequate healthcare,” Henry said. “Everyone else is stepping up in tough times – corporate CEOs need to as well.”

Several trade groups have put out workplace-safety recommendations, as have states, but those are typically voluntary, often unenforceable, and in many cases aren’t followed by citizens anxious to get back to regular life.

“No one quite knows how to proceed,” said Greg MacKinnon, research director at the Pension Real Estate Association. He noted that deep-cleaning services are now in high demand, but the price tag for such services can sometimes eclipse rent.

“There is no one-size-fits-all for this,” Harned said. “A restaurant is so much different than an auto repair shop.”

The particularities among various industries are already playing out in how trade groups focus on liability. For the restaurant industry — one of the visibly hit by the stay-at-home orders — consumer liability is not a front-burner issue.

Unlike diseases like e. Coli, which can be traced back to a single batch of bad lettuce served at a small restaurant, Covid-19 is not a foodborne illness and is extremely hard to track, given the incubation periods.

The group and its members have some concerns, however, about employee suits.

“We certainly are concerned about liability and attorneys filing (mass torts), but a more pressing issue is the business interruption insurance,” said Angelo Armador, senior vice president of legal advocacy at the National Restaurant Association. “We hope the courts will provide some relief there.”

A car with a sign calling for a safe and healthy workplace drives past Smithfield Foods Inc. in Sioux Falls, S.D., during an April 9 protest on behalf of employees, after many workers complained of unsafe working conditions due to the Covid-19 outbreak. The plant that produces roughly 5% of the U.S. pork supply each day was forced to close after nearly 300 of the plant’s workers tested positive for the virus. (Erin Bormett/The Argus Leader via AP, File)

The association is considering joining a lawsuit in Illinois, filed by manufacturers, that alleges the state wrongly declared Covid-19 a “workplace occupational disease” under the state’s worker’s compensation laws. That change places the “virtually irrefutable presumption that the claimant contracted Covid-19 through the workplace,” the suit claims.

While some states consider similar changes to their workers’ compensation rule, others have taken the opposite approach.

Earlier in the week Republican Governor Tate Reeves of Mississippi said he would ask state lawmakers to provide legal cover for businesses that might be sued if by either customers or employees who contract Covid-19 after they have reopened.

Last week, Oklahoma Governor Kevin Stitt asked President Trump to declare the Covid-19 pandemic “an act of God” to protect oil and gas producers’ from having their leases canceled due to production halts.

“Many operators desire to voluntarily reduce or cease producing on a temporary basis, without fear of parties taking advantage of an opportunity to cancel leases as a result of the curtailment of productions,” Stitt wrote.

Employment lawyers say companies have asked for such measures during previous crises as part of a decades-long attempt to remove employee and consumer protections.

“What you are seeing right now are really important lawsuits about how we keep people safe and specifically how to keep workers safe,” Duncan said.

3/4 of States Are Now Stand Your Ground; only 12 Are Duty to Retreat – Reason.com

How The Comments Of The Court and The Prosecutors Could Raise Challenges Going Forward...