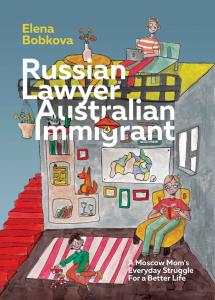 USA, Feb. 1, 2021 /EINPresswire.com/ – Elena Bobkova, a former Russian lawyer and now a writer who left the harsh reality of Russia and moved to Australia and then the US, reveals it all in her new book.

The author, who took the courageous step to leave Russia and go to new pastures, wrote a book to explain her struggles. The book shows what life was like in Russia and how she left Russia to move to Australia for a new and better life.

More than 145,934,462 people live in Russia. According to the federal statistics agency Rosstat, an estimated 377,000 Russians left the country in 2017. However, according to the US Department of Homeland Security, six times more Russians arrived in 2017 than Rosstat. Elena Bobkova paints a true picture of what life was like in Russia, which may explain why so many people are moving to the UK and the US for a new life.

I sat down with Elena Bobkova to learn more about her life and her book Russian Lawyer, Australian Immigrant: A Moscow Mother’s Daily Struggle for a Better Life.

1. Why did you now decide to write about your life in Russia?
As soon as I continue to open up the new world of the English language and all the exciting details of the etymology of words, the similarity of idioms with the Russian language, I was anxious to translate my books into English. The only problem was finding a translator who is native English and can keep my writing style. I tried so many translators and 3 years later I found one that was not only clicked on as a soul mate but was also willing to revise so many details of Russian traditions, idioms and superstitions to make it understandable and quietly fun for readers.

2. Her new book, available on Amazon, is called Russian Lawyer, Australian Immigrant: A Moscow Mother’s Daily Struggle for a Better Life. What is the book about?
The book is about a year and a half of my life in Moscow, Russia. The time when we decided to move to another country. It also examines why we did it and how difficult it was to apply for a qualified migration visa. Much of this book is about my son, who was 3 years old at the time, so there are lots of fun parenting moments.

3. We hear so many stories about Russia and how some Russians believe that freedom of speech is a luxury they don’t have. Can you paint a picture of real Russia?
Unfortunately it is true. It was pretty bad when we decided to leave the country and now it’s gotten worse.

4. So what was it like growing up in Russia?
There are many things that surprised my colleagues and that I would never have thought interesting. I’m from Siberia, so my childhood is very different from those who grew up in Moscow at the same time. The first time I saw and heard Western music or Hollywood films was in 1990. At the same time, I was very fortunate to study at the Law School in Russia from 1993-1999. The only time when there was no censorship in the country and we study the real law and history.

5. You were a lawyer in Russia. Why did you choose this career path?
I grew up at the local airfield and wanted to be an astronaut or a test pilot. But when I was 12, I was told that “girls don’t go to college”. During these times you can only be an astronaut (cosmonaut) through the army. I didn’t want to go into the army. So I decided to go to law school and defend my rights as an astronaut. On the other hand, I became a corporate attorney and defended the government in court firms and corporations (yes, it actually happens in Siberia, when you can go to court and win the case against the government).

6. You left Russia and moved to Australia. Why did you choose to do this?
We decided to leave because at some point it became clear that you were alone, helpless, unprotected by law or police (actually the police) and that all social institutions, including the medical and educational systems, were corrupted and censored. You can turn off the TV, but you cannot go without a proper medical or educational system, especially if you have children. At the same time, the climate in Australia was so appealing.

7. How difficult was it for you to settle into a new life in Australia?
Given that I couldn’t speak or understand English and thought I had a full “reset” with my career and spent a month at the hospital when I arrived, it was … easy compared to settling in Moscow after moving from Siberia. I was shocked at how nice and kind everyone and the medical system with free translation services and kind, empathetic people were. It was a shockingly different experience after Russia! I fell in love with Australia from the start and it’s still in my heart as my second home – just more warmth and acceptance.

8. Can you explain how different your life was in Australia compared to Russia?
The first thing that comes to mind that doesn’t consider me the most boring person – it’s taxes! Taxes in Australia are high, but you are happy to pay them because you can see where all the money is going. We have traveled a lot all over Australia and it was strange to see beautiful streets in villages or in the country – far from the city. When I started working as a chartered accountant, I was impressed by the sensible rules against small businesses, no bureaucracy, no corruption. I absolutely loved Australian multiculturalism: authentic Indian, Chinese, Japanese restaurants, different national communities in school – we didn’t have that in Russia.

9. In your new book, talk about the struggles you have faced. Can you share some of the topics that you cover with me?
The biggest struggle I would say is the stress and pressure. You live in survival mode all the time. If you have a full-time job (I was also a business partner at the consulting firm), you have a young child and you spend 4-5 hours in traffic every day – there is no energy for anything else. When we decided to move to Australia we were very aware of this. The hardest part was passing the English test (IELTS).

10. Do you think we are seeing real Russia on TV?
Depends on the news channel. There is a lot of censorship in Russia that TV stations affiliate with the Russian government. But for example the BBC and German broadcasters are doing a great job of highlighting the real news from Russia. Most of the uncensored news from Russia is now on Twitter or YouTube.

11. You cover an important topic in your book, and so the Russian legal system has many shortcomings. Were you surprised at how different the Australian legal system was from Russia?
I was surprised that it was easy and that it didn’t weigh heavily on companies. Now that I work in America and with a UK company, I’m more impressed with how people can influence the legislative system. How open and transparent it is and any comments or improvements from anyone are welcome. People don’t read the main source of legislative acts because it is boring, verbose and complicated. For me it’s like an interesting and exciting novel.

12. What would you need to return to Russia?
I am the person in the world but I don’t think I have enough motivation to return to Russia. My son Mike (half of the book is about him) grew up in Australia. He is now 16 years old and sees himself as Australian. it would be more difficult for him to live in Russia. He has a dream of becoming a NASA engineer and he does great at school if he passes all advanced classes with good grades. He speaks Russian, English and Spanish, so we’ll probably stay in the US.

Russian Lawyer, Australian Immigrant: A Moscow Mother’s Daily Struggle for a Better Life is available on Amazon in both Kindle and paperback formats.


ONE Presswire’s priority is source transparency. We don’t allow opaque clients, and our editors try to be careful about weeding out false and misleading content. If, as a user, you see something that we missed, please let us know. Your help is welcome. ONE Presswire, everyone’s internet news Presswire ™, seeks to define some of the limits that are reasonable in the world today. Please see our editorial guidelines for more information.