In our last post, we explained how previous ad hoc studies of attorneys’ mental health are flawed and how the National Health Interview Survey (NHIS) is the “trusted gold standard” for public health data, the prevalence of mental illness and Measures substance abuse more accurately. In this post and article, we examine what the NHIS sample says about lawyers’ mental health and alcohol abuse.

The NHIS measures mental health using the Kessler 6 Screening Scale (K6). The K6 score has been extensively validated as a reliable indicator of acute mental illness. Participants are asked six questions about their mental health and their answers to each question are scored from zero to four and then totaled. A total K6 value of at least five indicates that the respondent has moderate or severe mental illness, while a K6 value of at least 13 indicates a serious mental illness. “Severe mental illness” here means that the criteria for a DSM-IV disorder (except for a substance use disorder) have been met within the last year and that there is a severe impairment (defined using the “Global Assessment of Functionality” scale). People with moderate mental illness do not meet the criteria for DSM-IV disorder, but report other worrying features such as life impairments and increased visits to a psychologist.

Figure 2. Moderate or severe mental illness in people with BA or less, medical professionals, and lawyers. 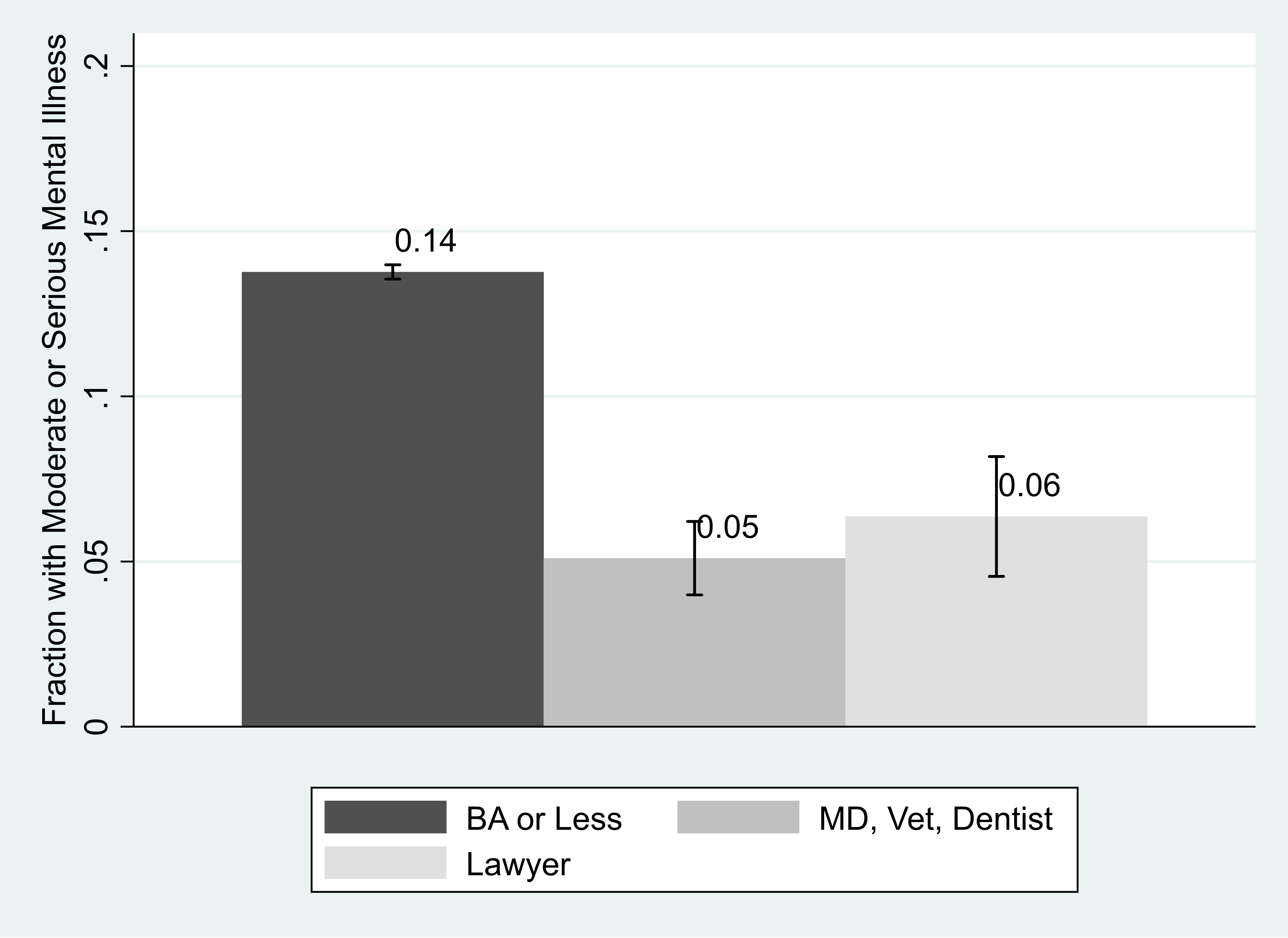 Other studies, including that spearheaded by the ABA National Lawyer Welfare Task Force, “found that younger lawyers in their first decade and those who worked in private companies had the highest rates of … depression. ” The NHIS data suggest otherwise: differences in mental illness between lawyers under 40 and their older colleagues were not significant, nor were differences between lawyers working in private law firms and those working in-house or for the government . 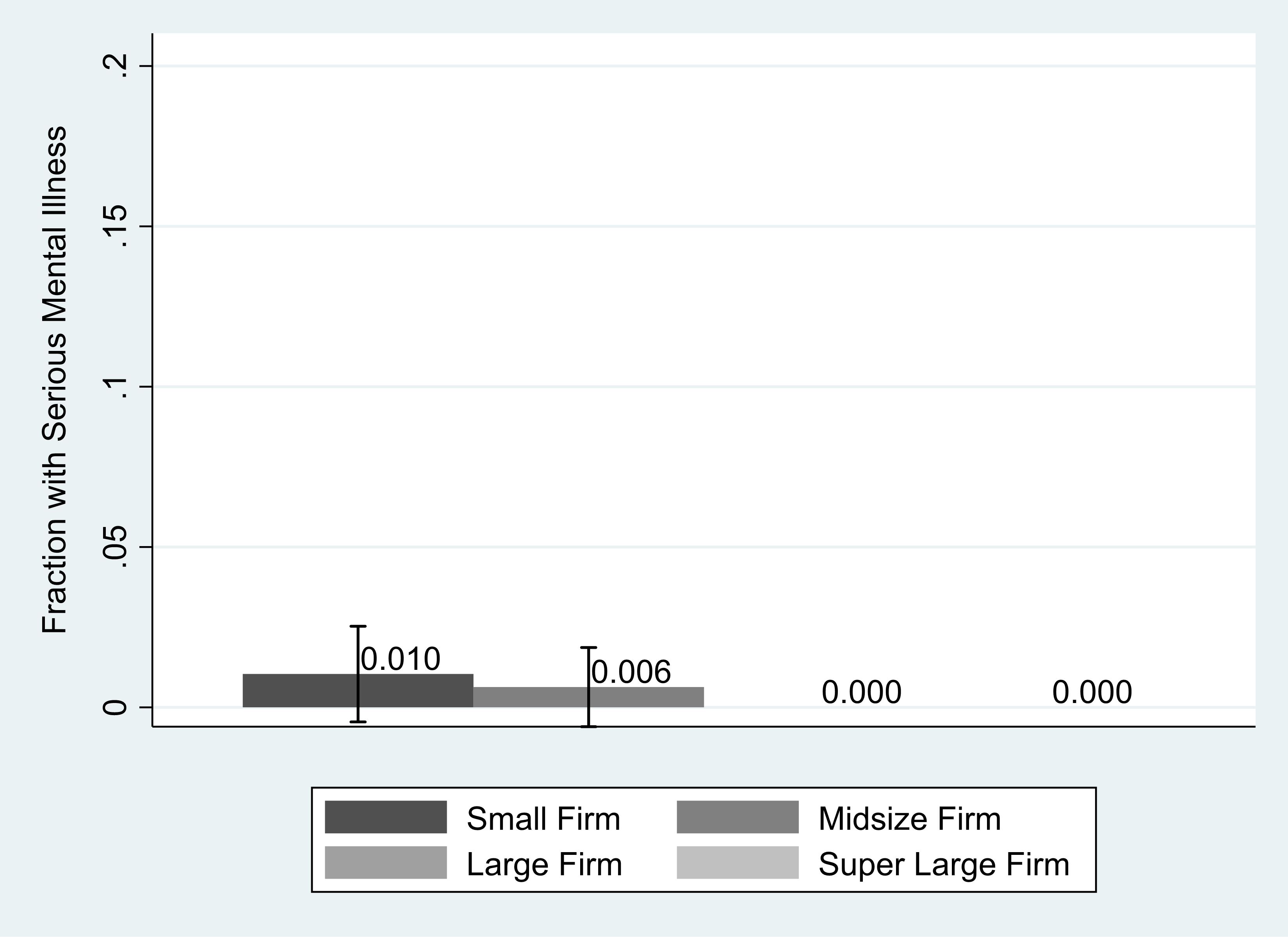 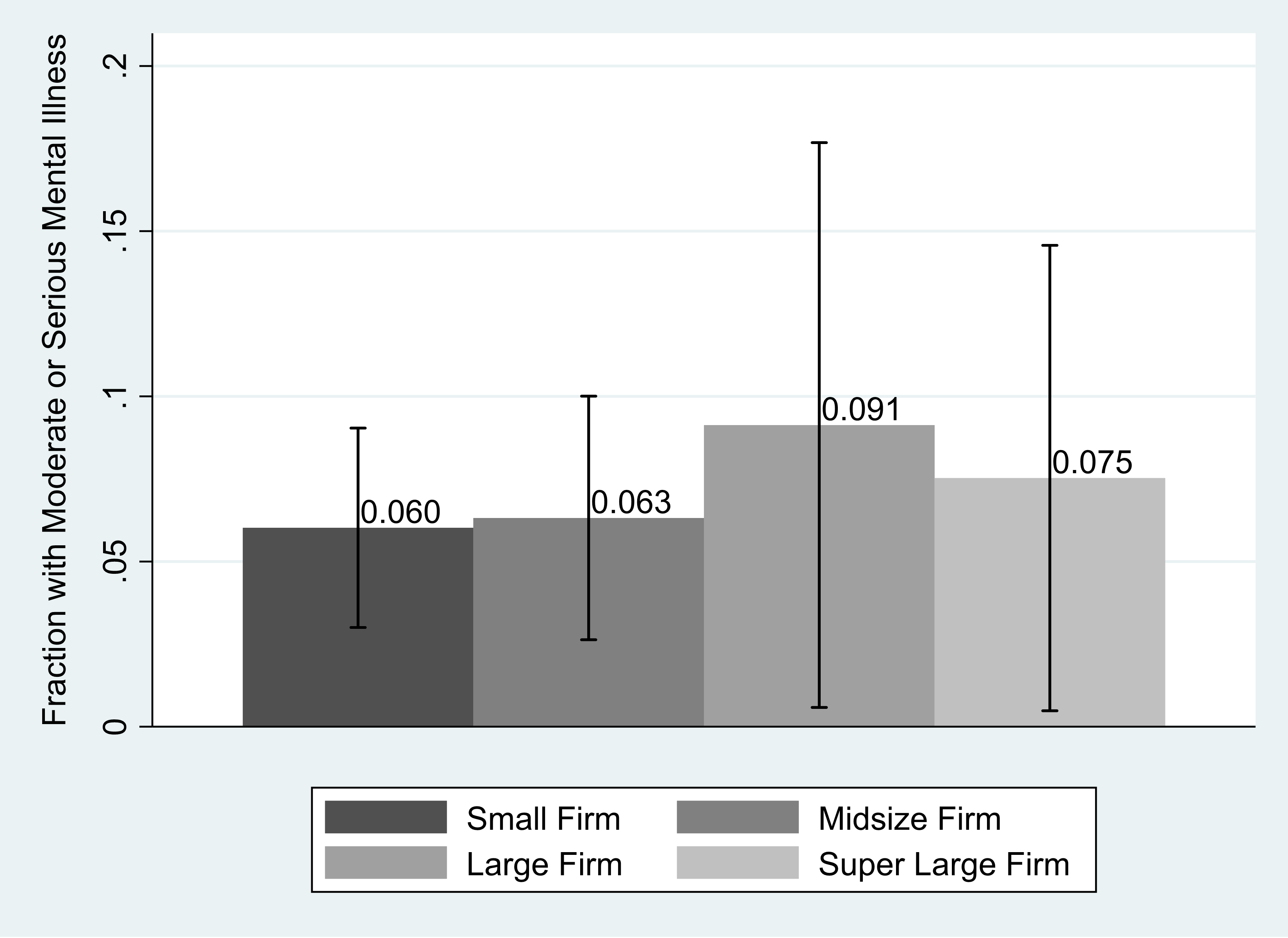 Any analysis of time trends for attorney wellbeing is difficult, relying on surveys of volunteer respondents with low response rates. If we compare very different surveys conducted in different years, observed trends can be traced back to real trends, or to differences in survey methodology or response rates. It is therefore not surprising that a longitudinal analysis of attorney wellbeing is extremely rare. Conversely, if we rely on the NHIS data to study attorney wellbeing, we can study trends over time because the NHIS has used a common survey methodology over many years. A look over time suggests that the incidence of severe mental illness among lawyers decreased slightly from 2004 to 2017, while the incidence of moderate or severe mental illness remained relatively constant. 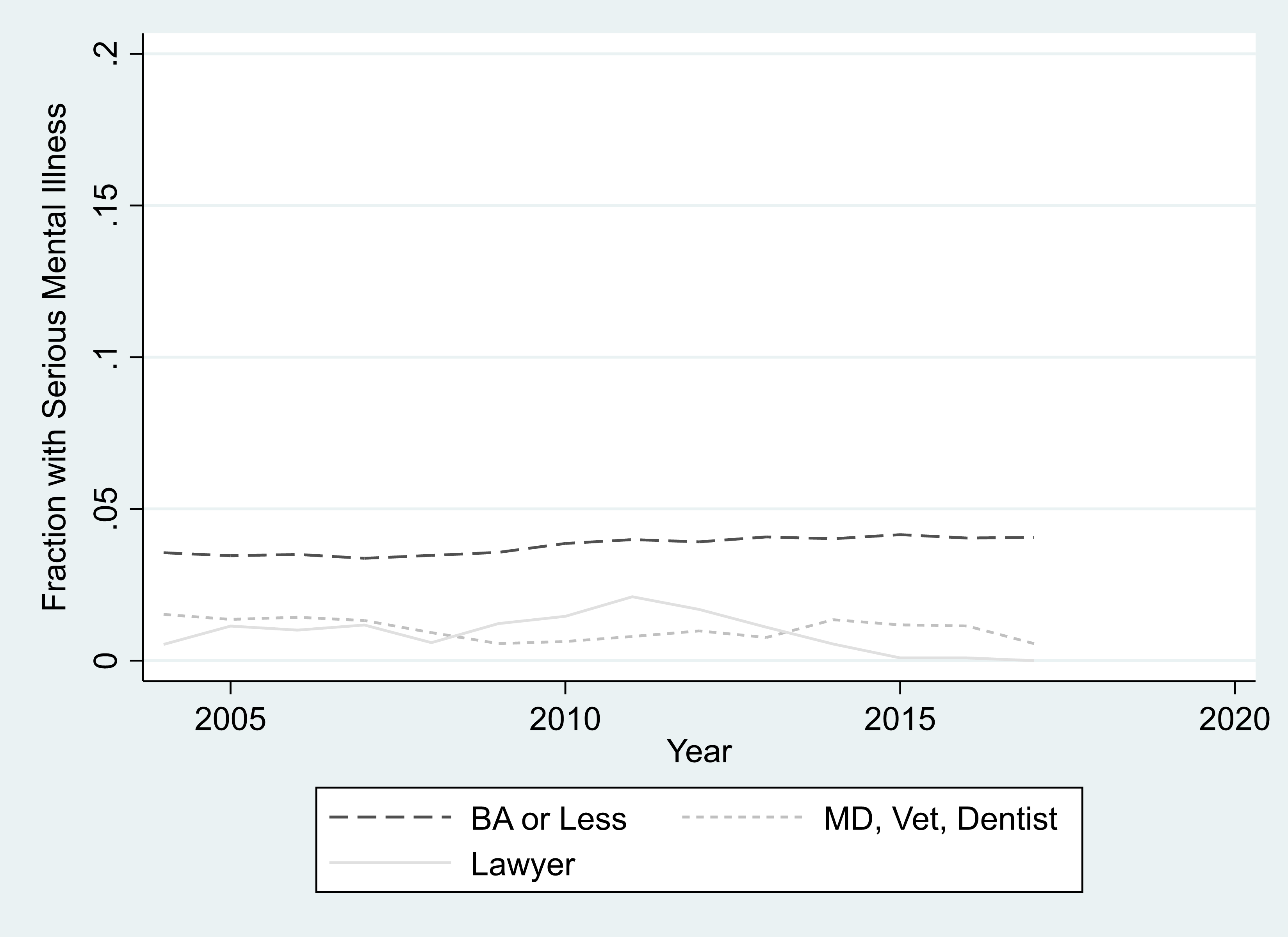 Figure 6. Fraction with moderate or severe mental illness over time 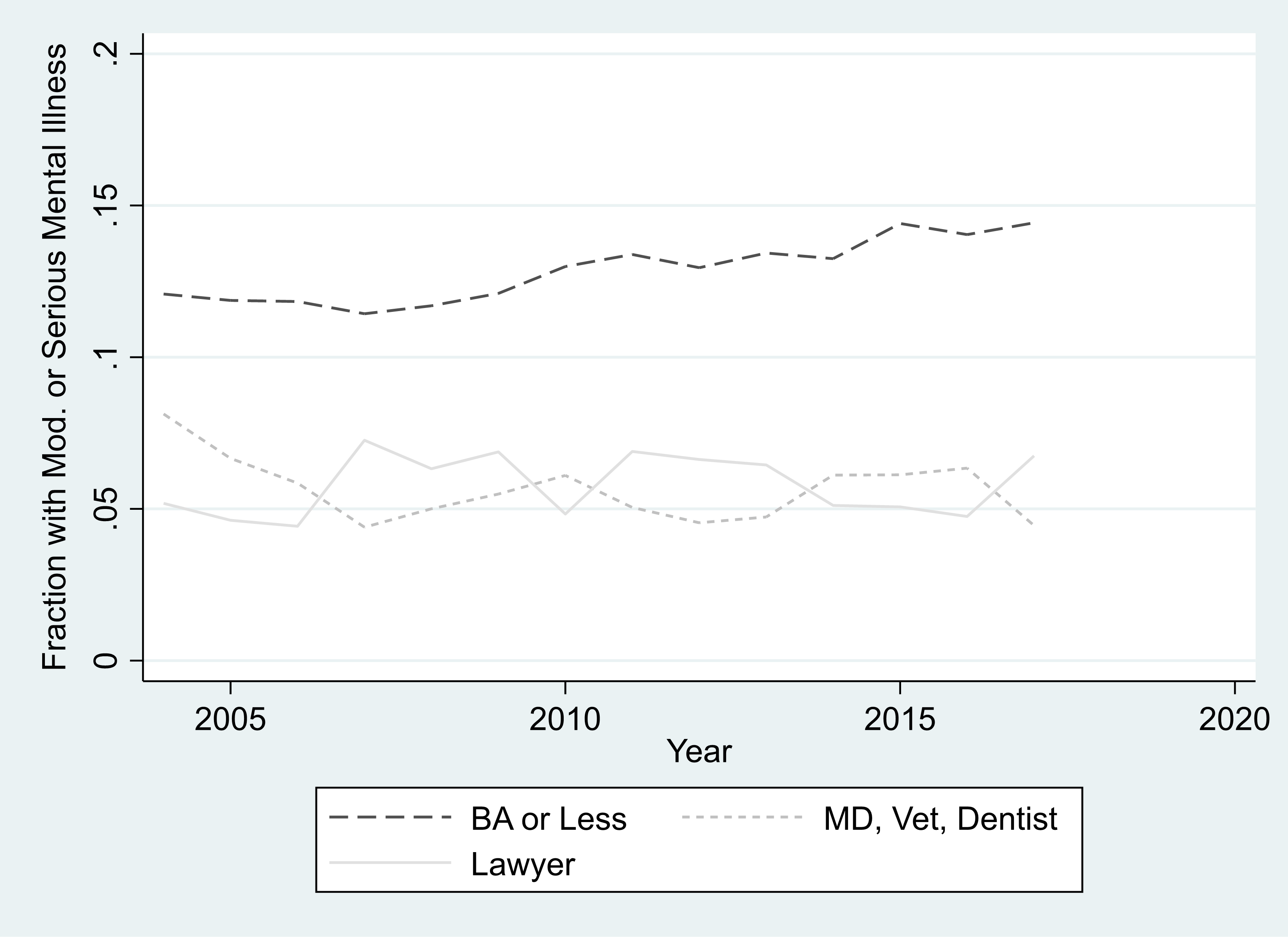 The NHIS data suggest that lawyers’ mental health is actually better than that of the general population, and no worse than that of medical professionals.

Problematic drinking data among lawyers paint a grimmer picture. Using a Center for Disease Control definition of excessive alcohol consumption – five or more drinks for twelve or more days a year – shows that lawyers in the NHIS sample have widespread alcohol abuse compared to similarly trained professionals. Eleven percent of attorneys reported excessive alcohol consumption. While this number is only slightly higher than the overall incidence of the NHIS population, it is more than double the excess alcohol fraction reported by other similarly trained professionals such as doctors and dentists. This difference is significant at 99%. 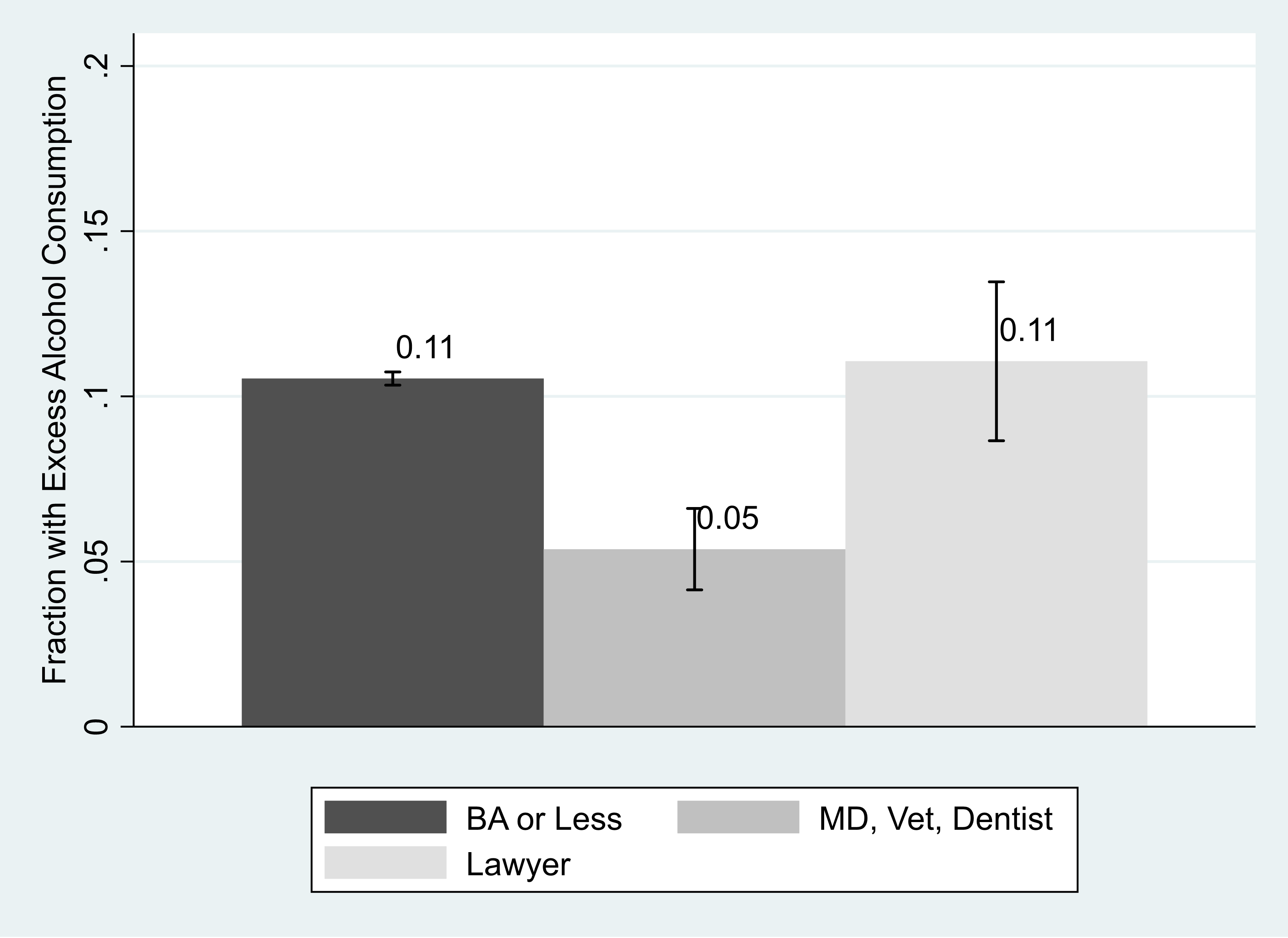 Demographic and fixed data provide additional nuances. We found that lawyers in large (100-499 employees) and very large (500+ employees) companies reported a much higher rate of problem alcohol use than other lawyers, although the difference is not statistically significant due to small sample sizes at 5%. In addition, male lawyers reported problem drinking at 1.5 times the rate of their female counterparts, a difference that is significant at 5 percent. 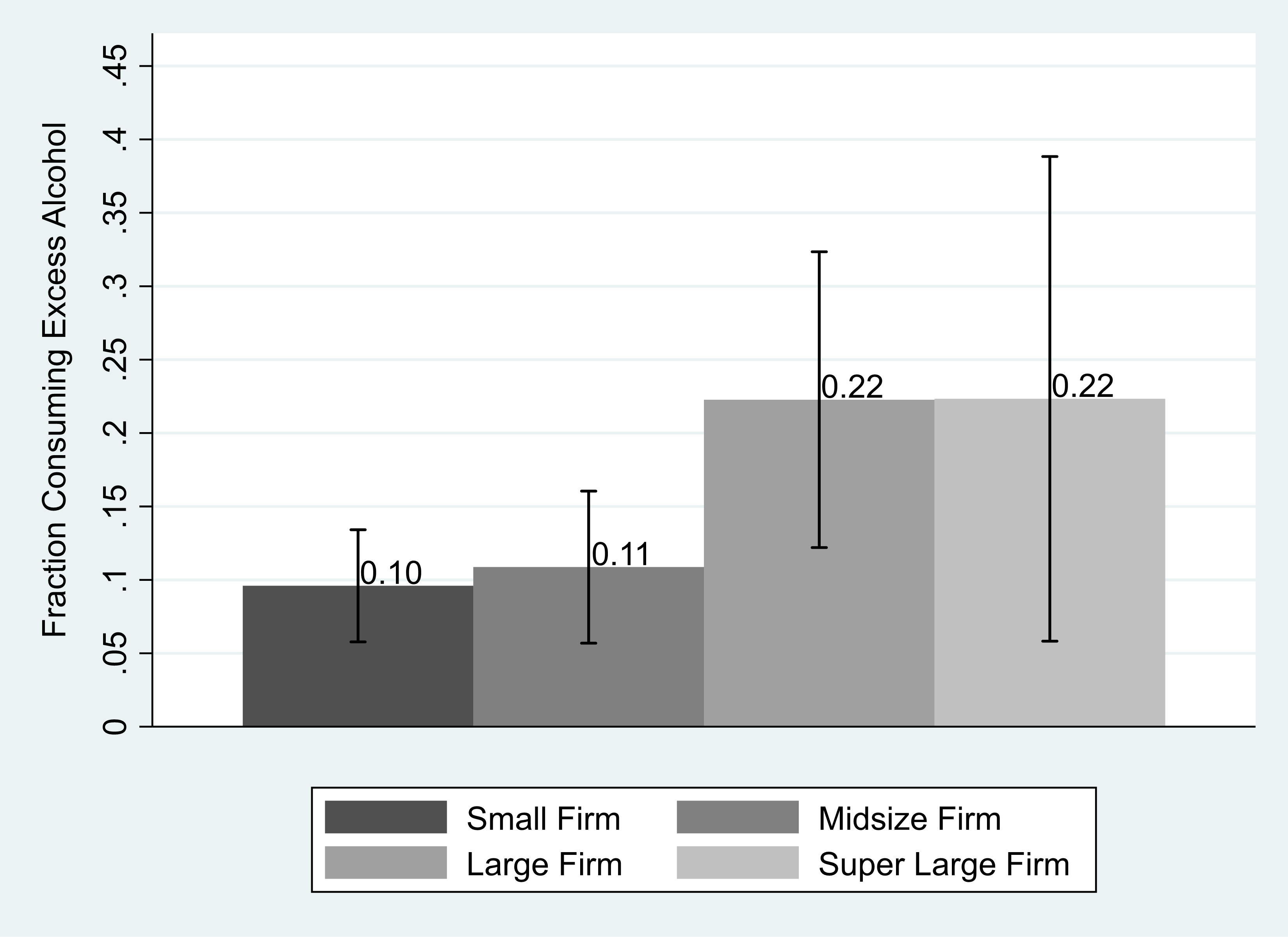 Although lawyers are much more likely to consume excess alcohol than similarly educated non-lawyers, the rate reported in NHIS (11%) is well below the rate in the ABA / Hazelden survey, which found “between 21 and 36 percent” [of lawyers] To qualify as a problem drinker. ‘However, this could reflect the different tools used to monitor problem alcohol use interventions. The ABA / Hazelden survey used the 10-point self-reporting tool to identify alcohol use disorders developed by the World Health Organization, Screen for Hazardous Use, Harmful Use and Potential for alcohol addiction. “

Time trends in lawyer alcohol abuse are similarly worrying. The problematic drinking rates among the lawyers in the sample increased significantly from 2004 to 2017. In contrast, problem drinking rates show a slight increase for other educational and occupational categories. Doctors, dentists and veterinarians, for example, report a relatively constant problematic drinking rate throughout the period. The dramatic increase in problem drinking rates for lawyers during this period thus represents a potentially problematic development, which is particularly important for the law, although standard errors are still high due to relatively small sample sizes. Identifying this previously unexplored trend is a great example of the opportunities arising from using repetitive annual surveys like the NHIS to examine attorney wellbeing instead of more ad hoc studies, even when those studies are larger samples to have.

Figure 10. Proportion of the population with excessive alcohol consumption over time 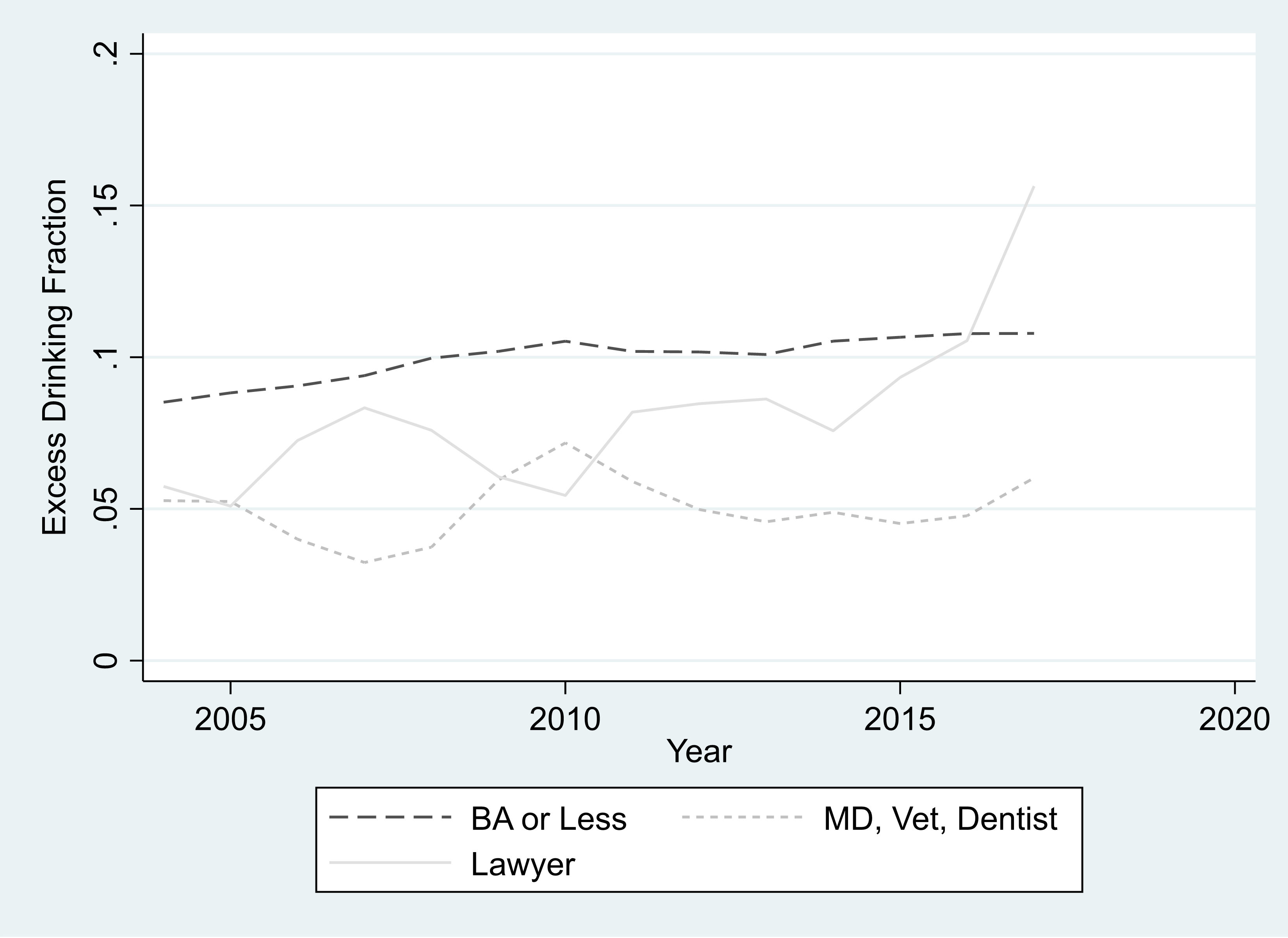 Overall, alcohol abuse appears to be a particular problem for lawyers that has worsened significantly recently. Reformers should evaluate the role of drinking within the legal culture and consider ideas for reducing the role of alcohol.

While attorneys do not report exceptional mental illness, mental health should remain a priority for the legal profession along with limiting substance abuse. The NHIS, while methodologically sound and reliable, provides a single source of data on attorney mental illness with only nine hundred and seventy-eight observations from attorneys. In addition, the high rates of alcohol abuse reported by attorneys may indicate underlying mental health issues at work that are not well captured by the K6 scores. To make more informed conclusions about professional mental health, we ideally would have more data sources, including a large randomized survey of lawyers with high response rates. For now, however, the NHIS data suggests that conventional wisdom about exceptional rates of mental illness in the legal profession may not be warranted.