Police body camera footage shows the use-of-force incident that resulted in the death of Javier Ambler II in March 2019.

The family of Javier Ambler II, a Black man who died last year in the custody of Williamson County sheriff’s deputies, filed a federal lawsuit against the county Sunday as nationally known civil rights attorney Ben Crump joined the case.

The 28-page suit included many findings revealed in an ongoing investigation by the American-Statesman and KVUE-TV, which reported in June that Ambler died after deputies chased him in March 28, 2019, after he failed to dim his headlights. The officers used Tasers on Ambler four times, the suit says, and crews from the since-canceled reality show “Live PD” destroyed video of the encounter.

The suit also makes several new claims, including that the department relied upon training techniques in which deputies were taught that they could keep using force on detainees who said, “I can’t breathe” — just as Ambler did — because they were still able to speak. 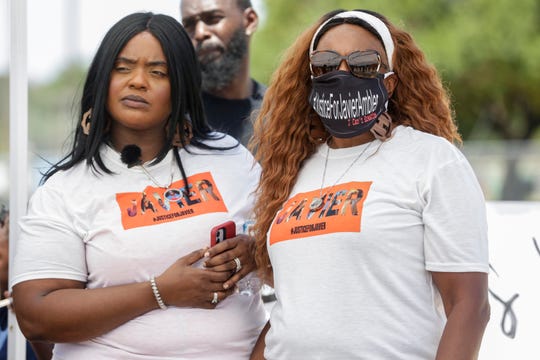 The lawsuit said the department and Sheriff Robert Chody, who was indicted in September on an evidence tampering charge related to the video destruction, promoted a culture of violence often for the sake of television.

Seeking unspecified damages for Ambler’s parents and two young sons, the suit also said two deputies used excessive force on Ambler and violated his rights as a person with a disability. Ambler was obese and told deputies multiple times that he had congestive heart failure.

“Sheriff Chody and his deputies made it a greater priority to create reality television than to defend and protect the citizens of Williamson County,” Crump said in a statement.

Crump also represents the family of George Floyd, whose death while in Minneapolis police custody in May touched off national protests. Like Ambler, Floyd told police that he could not breathe in what became a rallying cry for law enforcement reform.

Crump, who also represented the families of Botham Jean and Michael Brown, will work with Austin attorney Jeff Edwards as part of a growing legal team that also includes attorneys from two Chicago firms specializing in excessive force cases. Jean was fatally shot in his home by ex-Dallas police officer Amber Guyger in September 2018. Brown was fatally shot by a Ferguson, Mo., police officer in August 2014.