A former Oklahoma zookeeper sentenced to 22 years in prison for his role in a murder-for-hire plot and violating federal wildlife laws has formally requested a pardon.

Attorneys for Joseph Maldonado-Passage, also known as “Joe Exotic,” filed his application Tuesday with the US Department of Justice.

In it, attorneys for the 57-year-old say he maintains his innocence and that he was “railroaded and betrayed” by others.

Joseph Maldonado-Passage, known as “Joe Exotic”, was at the centre of the Netflix series Tiger King. (Santa Rosa County Jail via AP, File)

“Joseph is scheduled to be released from (Bureau of Prisons) custody in 2037; however, with his compromised health, he will likely die in prison,” attorneys wrote in the 257-page application.

“He humbly requests a pardon to correct the injustices he has experienced and to have the opportunity to return to providing meaningful contributions to his community.”

The application also includes several character affidavits, letters of support and various trial documents. A spokeswoman for the Department of Justice said it would be premature to comment on the application.

Mr Maldonado-Passage was convicted last year of trying to arrange the killing of a Florida animal sanctuary founder, Carole Baskin, who criticised his treatment of animals. Ms Baskin wasn’t harmed. 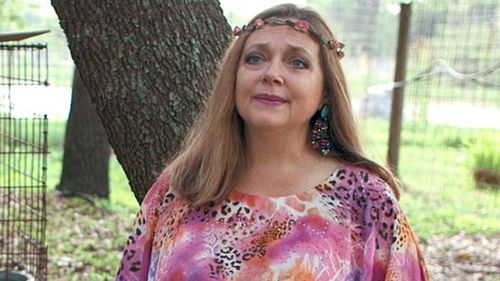 Mr Maldonado-Passage was convicted for a murder-for-hire attempt on Carole Baskin. (Netflix)

The blond mullet-wearing zookeeper, known for his expletive-laden rants on YouTube and a failed 2018 Oklahoma gubernatorial campaign, is prominently featured in the popular Netflix documentary “Tiger King: Murder, Mayhem and Madness.”Mr Maldonado-Passage is currently housed at the Federal Medical Centre, a 1,500-inmate facility in Fort Worth, Texas, prison records show.