An attorney who was to be the defendant in the first federal jury trial on Long Island since the March shutdown because of the coronavirus unexpectedly pleaded guilty Tuesday in a case charging him with looting a $2 million estate owed to a young girl.

Vincent Trimarco, of Smithtown, pleaded guilty in the midst of jury selection in federal District Court in Central Islip to one count of conspiracy to commit mail and wire fraud.

Federal prosecutors argued Trimarco deprived the girl, Rebecca Schaefer, of the money due her as part of a settlement in 2011 by Suffolk County after her father died in 2005 while a prisoner in the county jail.

Rebecca Schaefer was 4 years old at the time of her father’s death. She has never gotten any of the $2 million despite a civil lawsuit which is still ongoing, her attorney said.

Trimarco’s trial was scheduled to begin next week in front of U.S. Judge Joan Azrack, who issued a number of pandemic guidelines to keep people safe during the trial.

In entering his guilty plea, Trimarco spoke of one part of the $2 million scheme, purchasing and concealing the sale of a $150,000 Ferrari. He declined to comment after leaving court.

But his attorney, Dennis Ring, who, along with Matin Emouna, defended Trimarco, said that his client had fought to get the $3 million from the county and claimed Trimarco was unaware of the daughter’s existence until six years after her father’s death.

“In response to these unforeseeable circumstance, Mr. Trimarco made mistakes,” Ring said afterward. “Today he accepts full responsibility for them.”

As part of a plea deal to the original 19-count indictment, Trimarco faces 46 to 57 months in prison time under sentencing guidelines, as well more than a $1 million fine, and restitution to be determined between $1 million and $1.5 million.

Rebecca Schaefer, who is now 19, was in the courtroom for the plea, but she declined to comment.

Her grandmother, Debra Schaefer, who raised her and accompanied her to the courtroom, said afterward, “There is some justice, but it took too long to get it, and she could have had an even better life if she had gotten the money she was entitled to.”

The Schaefers’ attorney, John Ray, of Miller Place, who was also in the courtroom and had brought Trimarco’s scheme to the attention of the FBI, said afterward: “It has been a relentless pursuit for eight years. It is a shame that had come to this — a prominent Suffolk County lawyer and Republican party member has had to plead guilty and will have to pay the price [in prison]. But I have not given up on trying to get Rebecca’s money back.”

The origin of Trimarco’s case goes back to 2005 when Rebecca Schaefer’s father, Scott Eriksen, then 20, had been arrested on a misdemeanor marijuana charge. 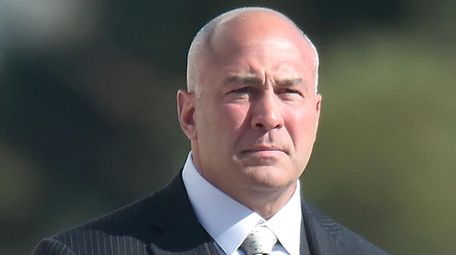 Eriksen family attorneys said he had been brutally beaten; jail officials said he only had gotten a minor cut on his head when he was placed in a cell after he became violent, but the county settled for $3 million because the girl’s father died from injuries he suffered while in jail.

Trimarco and another attorney split $1 million in attorneys’ fees in 2011 in the county’s $3 million settlement in Scott Eriksen’s death. The remaining $2 million was supposed to go to Eriksen’s heir.

But Trimarco and Gary Eriksen — the deceased Scott Eriksen’s father and Rebecca’s grandfather — collected the remaining $2 million, claiming that the grandfather was his son Scott’s legitimate heir, according to officials and court papers.

The two concealed the fact that Scott had fathered his daughter, Rebecca, who was being raised by Debra Schaefer, the mother of Scott Eriksen’s girlfriend, according to court papers, officials, and Ray, the Schaefers’ attorney, who represented the young girl. Debra Schaefer is Rebecca’s grandmother.

Ray unsuccessfully attempted to sue to get the money back, and then went to the FBI. Ray said the civil case is still pending before the Surrogate Court in Suffolk County.

Trimarco and the grandfather spent much of the settlement money on luxury cars such as a Ferrari Spider, a Jaguar XKR, property in Suffolk County and an investment in the Emporium, a now defunct Patchogue nightclub, officials said.

In addition, Trimarco then defrauded the grandfather of his share in a second scheme, by getting ownership in the cars and property, officials said.

Trimarco was indicted in 2017, but the grandfather, Gary Eriksen, had died several months before, and was, thus, only identified as an unnamed co-conspirator in the case.

Bob Kessler covers federal law, including law enforcement agencies such as the FBI, DEA, IRS and ATF, as well as the federal courts.

St. Louis legal professional’s assertion on shopper not being pardoned