One of the few positive aspects of the terrible Covid pandemic is the ability to have well-known “virtual” guest speakers in college and law courses. Tomorrow’s guest speaker in my Constitutional Law II class will be Prof. William Eskridge of Yale Law School, possibly the country’s foremost expert on same-sex marriage law and politics. He will speak about his recent book Marriage Equality: From Outlaws to In-Laws (co-authored with Christopher Riano). It is what we come closest to for a final comprehensive account of how same-sex marriage went from a radical fringe idea to a recognized constitutional law that was upheld by a Supreme Court decision.

A short anecdote shows how quick this transformation was. In 1992, when I was a college freshman, a gay classmate whom I will refer to as “Bob” asked me what rights I thought gays and lesbians should have. “The same rights as everyone else,” I replied.

Perhaps, sensing an evasive effort, Bob went on to ask what exactly I meant by that. I said it meant that anti-sodomy laws should be abolished (many states still had them), that gays and lesbians could openly serve in the military (a hotly debated issue at the time that culminated in the “don’t ask” question Don’t tell “1993 Compromise” and a few other similar points.

It didn’t cross my mind to mention same-sex marriage – an idea I probably hadn’t even heard of. Perhaps more tellingly, it didn’t seem to occur to Bob to ask! He seemed satisfied with the answer I gave, although it removed the problem. In 1992, many politically conscious people (including probably many gays and lesbians) barely knew that same-sex marriage was even an option.

As Eskridge and Riano document in their book, the idea of ​​same-sex marriage was long before that time. But few Americans were aware of it, apart from the relatively narrow circle of activists and political experts who delved into gay rights issues.

This changed within a few years. Until 1995, same-sex marriage was the focus of public debate, although the majority of public opinion strongly opposed it. I myself was happy to support same-sex marriage as soon as I heard about the concept (probably around 1994 or so). But that was a minority view, a time.

While some of the state’s highest courts have ruled in favor of a right to same-sex marriage under their constitution, the national majority opinion remained against it until around 2012. Even liberal politicians like Barack Obama found it beneficial to stand up for yourself or at least against doing so.

Ultimately, however, public opinion shifted decisively in favor of same-sex marriage, and in Obergefell v. Hodges (2015), the Supreme Court ruled that laws prohibiting same-sex marriage are unconstitutional. That only happened a little over two decades after my little discussion with Bob.

What caused this dramatic transformation? If you want to know the answer, read Eskridge and Riano’s book! However, it may well be that we are still too close to these events to get a proper historical perspective on them. Legal scholars, historians, and social scientists are likely to debate its implications for many years to come.

For now I want to mention two important lessons that, in my opinion at least, permeate marriage equality.

First, legal and political measures are mutually reinforcing to achieve constitutional reform. Time and again Eskridge and Riano describe how victories in court create the conditions for victories in politics and vice versa.

Early same-sex marriage decisions in state courts, such as the Massachusetts Supreme Court ruling in Goodridge v Department of Public Health (2003), were made possible by the (partial) success of the gay rights movement’s efforts to shift public opinion about gays and lesbians in general . These decisions, in turn, gave the gay rights movement another boost, paving the way for further changes in public opinion and more favorable court rulings that eventually culminated in Obergefell. The “normalization” of same-sex marriage required a combination of legal and political action, not an exclusive focus on one or the other. These two strategies were not mutually exclusive, as some scientists argue, but were mutually reinforcing.

Eskridge and Riano were not the first scholars to record such a process. Earlier writers found similar patterns in civil rights movements, the women’s rights movement, the gun rights movement, and others. I wrote about it myself in connection with the struggle to strengthen the constitutional protection of property rights. Marriage equality, however, is a particularly thorough and illuminating account of how this synergy works in one of the most famous constitutional movements of our time.

As an Iowa Supreme Court ruling cited by Eskridge and Riano put it, plaintiffs in the case were “in committed and loving relationships, many raised families, as well as heterosexual couples.” Similar statements can be found in all of marital equality. Ultimately, the same-sex marriage movement triumphed by focusing on universal principles of freedom, justice, and equality rather than a distinctive group identity.

Again, this is anything but unique to the struggle for same-sex marriage. We see the same pattern in the success of the anti-slavery movement and in movements for race and gender equality. Elsewhere, I have argued that advocates of free international migration should pursue a similar strategy regardless of morally arbitrary circumstances of ancestry and place of birth.

It is no accident that the most famous and successful image of the anti-slavery movement was this 1787 picture of a black slave by Josiah Wedgewood in which he asked, “Am I not a man or a brother?” 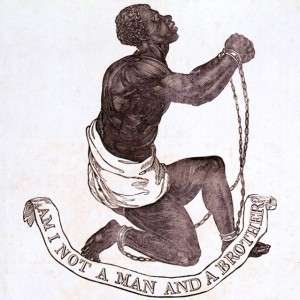 Wedegwood brought home the point that there is no morally meaningful distinction between blacks and whites, and therefore no good reason to deny the former the same freedom that the latter claims.

Similarly, the same-sex marriage movement (and the gay rights movement in general) emphasized that gays and lesbians are also our brothers and sisters (sometimes literally!) And that differences in sexual orientation are ultimately superficial. So there is no good reason to deny gays and lesbians the same rights in their relationships as they do straight.

This lesson may seem obvious. However, it contradicts the positions of many identity-political movements both on the “awakened” left and on the nationalist / identitarian right, which focus on the supposed uniqueness and incommensurability of different ethnic, racial, cultural and religious groups.

Much more can be learned from Eskridge’s and Riano’s excellent book. A selection of some of the other questions raised can be found in this recent symposium at the Balkinization site.