Three Edmonton police officers responsible for a photo posted on social media mocking a shirtless, handcuffed prisoner who allegedly is highly addicted to drugs have received additional training after an internal investigation – a disciplinary decision made by a criminal defense attorney deems inadequate and further undermines public confidence in the police.

Police Chief Dale McFee ordered an internal investigation into Const’s actions. Mike Roblin and the other officers in early June, immediately after CBC News reported the photo posted on the cop’s Instagram account.

In the photo, Roblin and another officer pose with the arrested man, whose face is black.

A caption below the photo read: “This beautiful young man was so enthusiastic about the service we provided him that he wanted to capture the moment with a picture.

“Just kidding, it was so high he thought he was on Mars.”

One substance abuse expert called the photo “gross” and said it could thwart efforts to get addicts to seek help.

In a statement on Monday, an EPS spokesman said McFee had accepted the recommendations of the internal investigation, which “asked the three members to meet various internal and external training and development expectations.”

“The three members recently met these requirements by completing additional training, including courses that focus on ethics and accountability, bias awareness and risk-effective decision-making, among others,” said Scott Pattison.

The police statement also said they couldn’t find the man in the photo so they could apologize to him.

EPS Const. Mike Roblin posted this photo on his Instagram account on May 9th. He then deleted it, but a citizen took the picture and filed a complaint with the police. (Mike_Roblin / Instagram)

Edmonton attorney Tom Engel is the chairman of the police committee for the province’s Criminal Trial Lawyers’ Association. He said the officers’ discipline should have been stricter.

“And what it does is minimize the severity of the wrongdoing for the public.”

Roblin posted the photo on May 9th. He deleted it, but a citizen picked it up and complained to the Department of Professional Standards of Service on May 11, before filing a formal complaint on May 12.

The police initially said they had dealt with the matter informally. The same day that CBC News covered the photo, EPS said McFee had ordered an industry investigation for professional standards. It declined to identify other investigated officers, saying it was the force’s policy to only do so if they are charged.

There is a lack of transparency

Engel supported the decision to open an internal investigation. Without this formal process, he said, there would be no transparency about what happens when officials are disciplined.

However, in the months that followed, there was little transparency – and several conflicting statements – from EPS and McFee on the matter. 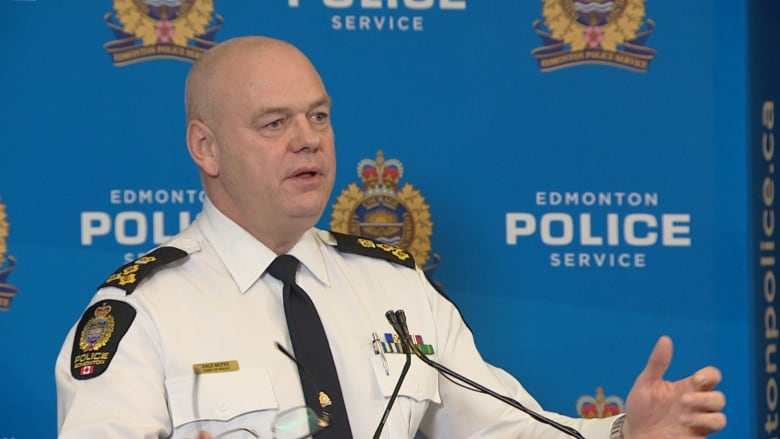 On September 1, EPS told CBC News that the internal investigation had been completed and was awaiting a disciplinary decision from Chief Dale McFee. The police repeatedly said they had nothing more to reveal until October 19. (Richard Marion / CBC)

On September 1, an EPS spokesman said the internal investigation had recently closed and the matter was before McFee for a disciplinary decision. The boss confirmed this to another CBC news reporter that same day and said he should get back to him in a few days.

Police repeatedly said there was nothing to reveal when the CBC news was investigated, even as late as October 19.

However, Monday’s EPS statement stated that the investigation closed in mid-September and officials have already completed corrective actions.

A judge found him guilty of assault when he hit an EPS colleague who suffered a severe concussion at a wedding reception in 2015.

The judge granted Roblin parole, but later pleaded guilty to an internal disciplinary hearing on January 31, 2017.

Roblin is also one of several officers currently under investigation by the Professional Standards Department for conducting a no-guarantee search of the property of a well-known downtown slum landlord and a convicted drug dealer.

In 2019, the Law Enforcement Review Board ordered that the police re-investigate after finding that the original investigation was inferior.

How The Line Between The Press and The Prosecution Disappeared In The Chauvin Trial...